M/S, SunPro™ Group Of Companies was started in 2014 for the manufacture and marketing of Metallised films (or metallized films)based packaging. The company is equipped with Latest Extrusion laminations of Metallised films (or metallized films) with paper,board and various plastic films. Beside they do have in–house Auxiliaries facility. M⁄S, SunPro™ Group has the capacity for processing 100 Tons of foil in assorted thickness a month. 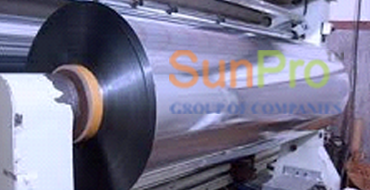 Metallised films (or metallized films) are polymer films coated with a thin layer of metal, usually aluminium. They offer the glossy metallic appearance of an aluminium foil at a reduced weight and cost. Metallised films are widely used for decorative purposes and food packaging, and also for speciality applications including insulation and electronics

Metallisation is performed using a physical vapour deposition process. Aluminium is the most common metal used for deposition, but other metals such as nickel or chromium are also used. The metal is heated and evaporated under vacuum. This condenses on the cold polymer film, which is unwound near the metal vapour source. This coating is much thinner than a metal foil could be made, in the range of 0.5 micrometres [1]. This coating will not fade or discolour over time. While oriented polypropylene and PET are the most common films used for metallisation, nylon, polyethylene and cast polypropylene are also used.

Metallised films used for balloons Metallised films were first used for decorative purposes as Christmas tinsel, and continue to be used for items such as wrappers and ribbons. The metallic helium filled novelty balloons given as gifts are made of metallised BoPET and often called Mylar balloons commercially

Both metallised PET and PP have replaced foil laminates for products such as snack foods, coffee and candy, which do not require the superior barrier of aluminium foil. Metallised nylon and polyethylene are used in the meat export market. The controlled permeation extends shelf life. Metallised films are used as a susceptor for cooking in microwave ovens. An example is a microwave popcorn bag.Many food items are also packaged using metallised films for appearance only, as these produce a package with greater sparkle when compared to competing products that use printed paper or polymer films.

Metallised PET films are used in NASA´s spacesuits to make them radiation resistant and keep astronauts warm, and in proximity (aluminized) suits are used by AR-FF fire fighters for protection from the high amount of heat released from fuel fires. Silvered emergency blankets are also used to conserve a shock victim's body heat. These reflective materials might also be used as part of industrial and commercial insulation (for example, insulated shipping containers.)insulating blankets made with Metallised PET were also used as insulation in aircraft untilsafety concerns resulted in their deprecation.[5] In particular, it was found to be a major cause of the in–flight fire of Swissair Flight 111 on September 2, 1998.

At M⁄S. PATELS POLY–PACK, we provide a comprehensive array of Industrial Coated Metallised films (or metallized films) and Metallised films (or metallized films)Laminated Material by Extrusions Process , which is extensively demanded by many industries and printing company owing to their superior quality. We have wide range of Alluminium Foil Coated / Laminated Material by Extrusions Process as below...s